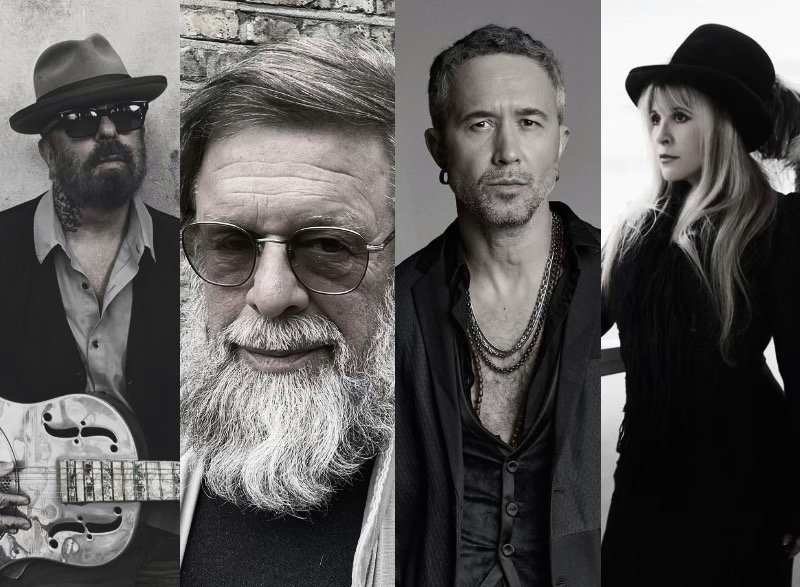 Dave Stewart, Boris Grebenshchikov and Serhii Babkin have come together to release a new song — “Face to Face”, while simultaneously launching “Collaborate For Peace.”

The song’s release and purpose of “Collaborate For Peace” is to assist in raising awareness for the President of Ukraine Volodymyr Zelenskyy’s global UNITED24 initiative, helping to provide medical care for the citizens of Ukraine.

With Stevie Nicks providing harmonies, “Face to Face” was written by Stewart, renowned Russian musician Boris Grebenshchikov and famed Ukrainian artist Serhii Babkin, together showcasing a global, synergistic effort for peace, with hopes to inspire other artists to do the same and help raise money for UNITED24.

All proceeds from streams and sales of “Face to Face” will go directly to UNITED24.

Hailed by the BBC as “The Bob Dylan of Russia,” Boris Grebenshchikov has been deemed that “not only because of the outsized influence the discovery of Dylan had on him as a young musician in the culturally isolated Soviet Union; it also owes something to Grebenshikov’s outsized popularity in that country.” Known as one of the founding fathers of Russian rock music, Grebenshchikov is loved by generations of Russians and considered the greatest living poet and a cult hero.

Grebenshchikov adds: “This war — in the center of Europe in the 21st century — is an insult to all humanity.”

Ukrainian musician, actor, author and performer, Serhii Babkin is known throughout Ukraine as a member of the acoustic duo 5’nizza, which gained popularity fairly quickly around Ukraine, Belarus, Russia, Lithuania and Latvia. As a solo artist, Babkin has released 13 albums and collaborated with several significant Ukrainian musicians. A native Kharkiv citizen, he was invited to be a mentor on The Voice for both Season 7 and 8 and also appeared on Dancing with the Stars, with his wife Snezhana. Together, they became one of the most beloved pairs and a favorite couple to Ukrainian viewers.

“It's a great honor for me to be a part of this song and to record with such legendary musicians,” shares Babkin. “I’m very grateful to Dave Stewart, Boris Grebenshchikov and Stevie Nicks for their support of Ukraine. Today, Ukrainian people suffer so much because of the war that Russia unleashed. I want to express not only that terrible pain but also a hope. With my part of the song, I want to say: It won’t always be like this. It’s a cruel fight between Good and Evil, Light and Darkness. And Light will prevail, I truly believe it will!”

Discussing the inspiration behind “Face to Face,” Stewart says: “I wanted to write a gentle, peaceful song after seeing all the horrible images coming out of Ukraine. The song is about how all war is horrific and it’s written from the perspective of a young 18-year-old having to march off to war, not really understanding what he’s getting into.”

Stevie Nicks adds: “Since the day the war began, I have carried Ukraine and its people in my heart. I am so honored to sing on this song written by my friend Dave Stewart, Boris Grebenshchikov and Serhii Babkin. I hope it reminds people to continue to support Ukraine. I remind people during my shows to remember — this war is not over…

About UNITED24
UNITED24 was launched by the President of Ukraine Volodymyr Zelenskyy as the main venue for collecting charitable donations in support of Ukraine. Funds will be transferred to the official accounts of the National Bank of Ukraine and allocated by assigned ministries to cover the most pressing needs. More information here.

About “24,000 Friends of Ukraine”
Together with the UNITED24 ambassadors Andriy Shevchenko and Liev Schreiber, the President launched the 24,000 Friends of UNITED24 initiative. The idea of the project is to support Ukraine in their fight and congratulate them on Independence Day by subscribing for $24 monthly donations. Everyone who signs up will receive a thank-you notice signed by the President of Ukraine. Charitable subscriptions are available in the direction of Medical Aid. Regular donations will allow the Ministry of Health of Ukraine to plan purchases to support the work of Ukrainian doctors and save more lives. In more than three months, 35 ventilators, 22 X-ray C-arm machines, 83 anesthesia machines, 9 operating tables, 5 children's ALV devices and 57 C-type ambulances have already been acquired.