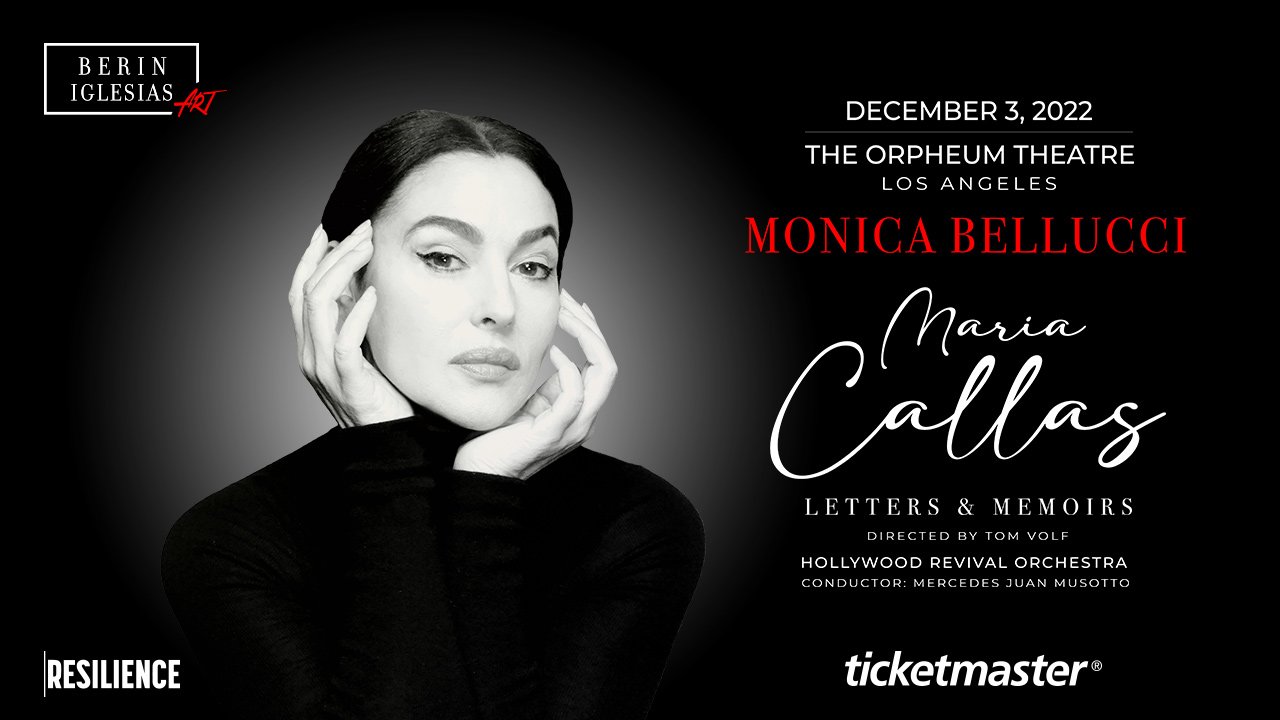 One show only in Los Angeles, Saturday, December 3rd.

Maria Callas back to life"

« One day, I will write my own autobiography, I wished to write it myself, to make things perfectly clear. So many lies were told about me... » Maria Callas

To celebrate the publication by Albin Michel of the book Maria Callas Lettres & Mémoires, Monica Bellucci started performing on stage for the first time at Studio Marigny for a series of exceptional readings, at the end of 2019.

From Maria Callas's modest childhood in New York to the war years in Athens, from her discreet beginnings at the Opera to the pinnacle of a planetary career marred by scandals and personal tribulations, from an idealized love for her husband to her inflamed passion for Onassis, this unique story reveals, for the first time, the real story behind the legend. Unveiled sometimes as Maria, the vulnerable woman, torn between her life on stage and her personal life, sometimes as Callas, the artist, victim of her own demands and embroiled in a perpetual battle with her voice, and who, despite her loneliness in Paris in the last years of her life, continued to work relentlessly, until her very last breath at the age of 53.

The fascinating and deeply moving self-portrait of the XXth Century's greatest voice.

« This show is for me the result of 7 years of work dedicated to Maria Callas. In the movie Maria by Callas (which came out in 45 countries in 2018) a few letters were already there in the background. They represented for me the most intimate voice of the woman behind the legend, more Maria than Callas. In the exhibition bearing the same name, once again some of these letters were there, this time physically behind showcase windows. With the book Maria Callas Lettres & Mémoires I had the impression that I was adding the last touch to the edifice of a huge and daunting multi-project through the common angle: putting Maria's voice on center stage, and enabling her, through a number of hereto unpublished documents and archives, to tell her own story, with her own words.

At the same time as the book was being released, my meeting with Monica Bellucci gave birth to this ultimate project, on stage this time. It was a real challenge, being responsible and able to relate Callas's life, using only her own words, exclusively, in a show which lasts just slightly more than an hour. Indeed, what we are talking about here is 30 years of a life filled with glory and pain, unfolding under our very eyes. Her memoirs, which are incomplete, open and close the show. Maria speaks directly to the audience and confides in them, revealing herself as never before. For the first time she's the one telling her own story, instead of others speaking on her behalf. And through these numerous letters, to people close to her, some of them anonymous, some famous, it's an unrecognized, unknown woman that we are allowed to discover; strong and vulnerable at the same time; filled with ambition and dreams in her younger years; filled with doubts and suffering in her later years.

The show is designed in three parts, that follow each other chronologically, divided naturally between the three decades spanned by Callas: the 1950's, her first stage performances and her wedding with Meneghini, the 1960's, meeting Onassis and their romance, broken up eight years later, and the 1970's, her last years, filled with nostalgia and loneliness.

Center stage a sofa, the exact reproduction of the one that used to be on Avenue Georges Mandel, the Paris apartment where Callas spent the last 15 years of her life. At the end of the sofa, a gramophone, on which Maria used to listen to her own recordings and to the Bel Canto music which she loved so much. This music and her recordings are heard on several occasions during the show, as a hyphen from one letter to another, symbolizing time flowing by, a voice which starts to gush out with all the power of youthfulness, and which, little by little, starts to fade away, leaving nothing else behind but a piano, playing on its own, long lost melodies.

Monica Bellucci wears a dress which belonged to Callas, lent by the Italian collection My private Callas and which remained secluded in secrecy for more than 60 years, and which had never been worn by anyone else. This dress and Monica's spectacular transformation, as well as the play of lights and chiaroscuro, give us the impression of really being in Callas's own living room, her spirit re-appearing for a short while in order to share, through Maria's own words, a moment of intimacy with her audience. »

Since her very first movie appearances in 1991, Monica Bellucci has worked with the greatest international filmmakers. A popular heroin and the muse of auteur films, her parts range from James Bond Girl in Spectre, to Cleopatra in Asterix and Obelix, Persephone in Matrix, all the way to Alex in Irréversible or Nathalie in Doberman. Acclaimed several times as the world's most beautiful woman, she is one of the best-known faces of contemporary international cinema. Today, she is premiering on stage at the Studio Marigny for exceptional readings of Lettres et Mémoires de Maria Callas.

As the Director of the film Maria by Callas, Curator of the eponymous exhibition, and the Author of two volumes of a hereto unpublished iconography, Tom Volf is recognized nowadays as one of the world's greatest specialists of the famous opera singer. He also launched the Maria Callas Endowment Fund, dedicated to the preservation of the artist's personal archives. This book is the fruit of five years of research all over the world.